Shipwreck Island is an Environmental location in Raft. 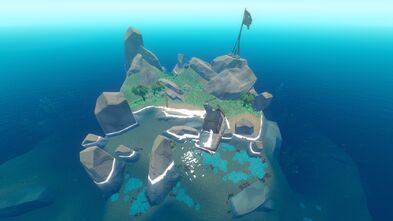 Shipwreck Island has a 2% chance of spawning when a Small Island is rendered. It contains valuable resources just like other islands but it is also home to the Abandoned Ship with has various unique loot. Shipwreck Island also contains a flag post reading 'HELP' in capital letters on its upper section. The Captain's Hat and the Radio can be found inside the Abandoned Ship.

Since Shipwreck Island is a Small Island, it does not have any antennae, and as such does not appear on the Receiver meaning the player will have to spot it manually. There is a lot of scrap in the surrounding ocean, though it doesn't contain many other resources. Unlike other Small Islands, it contains two diggable patches of Dirt, one Cave Mushroom, and three Silver Algae. There is also two Poison-Puffer in the surrounding water. 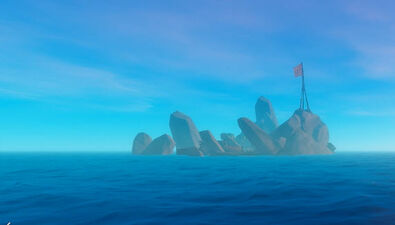 Players receive the achievement O Captain! My Captain!? for visiting the Island and its Abandoned Ship.