Thank you for your support.

Edit
watch 02:46
The Quarry - The Loop
Do you like this video?
Play Sound 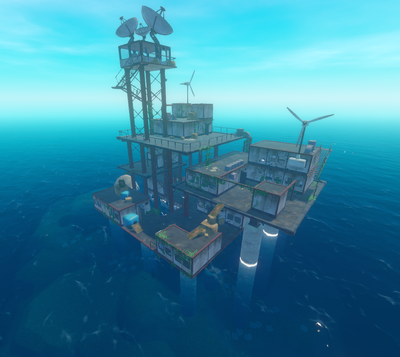 The Radio Tower, also called the abandoned sea facility, is a location in Raft. It can only be reached using a Receiver.

It is a large facility built upon a small barren Island.

There are blueprints for the Head Lamp and the Recycler here. As of the Final Chapter, the player will also find the player character Tala at the top of the tower. Simply speak to her to unlock her. After speaking, she will fade out, leaving behind a glowing circle where you can speak to her again to repeat her activation dialogue.

The facility contains lootable Materials such as Scrap, Plastic, Glass, and Vine Goo, which do not require tools to gather. These Resources can also be found in large crates throughout the building. In the tower is a white board that reveals part of the game's story. There are multiple floors, including one that is underwater. Beneath the building, the player may find regular underwater Materials as with other Islands. There are 5 notes in total.