Poison-Puffers are enemies in Raft. They are one of multiple threats to the player.

To kill the Poison-Puffer, a Metal Spear or a Bow is recommended, although the bow is definitely the safest. It takes four Stone Arrow hits (seven on hard), or three Metal Arrows hits (four on hard) to kill the Poison-Puffer. If engaged with multiple fish at a time, swim in circles a few times in order to center the fish and then take them out one at a time using any of the methods below.

When finding a Poison-Puffer, start the fight by luring it by swimming near it. Back away until ready to attack, then move forward, stab it and immediately move back again in a fluid motion. Repeat.

Once being chased by the Poison-Puffer, begin backing up and start firing arrows. Keep in mind that arrows travel much slower underwater, so try to not swim too far ahead of the fish before shooting. It is also possible to lead the fish to shallow water. Lure the fish to shallow water and exit the water. The fish will turn around and start to swim away. Once the fish is a safe distance, re-enter the water. The fish will swim either left or right to turn around to attack you. Shoot the fish with the arrows and exit the water when it becomes too close. It is possible to shoot the fish multiple times by repeating this. 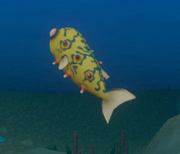 Poison-Puffer As Seen From the Side 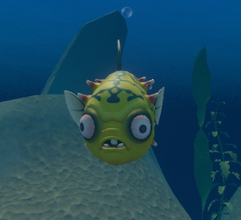 Poison-Puffer As Seen From the Front
Retrieved from "https://raft.fandom.com/wiki/Poison-Puffer?oldid=19330"
Category: