Edit
watch 02:58
No Man's Sky Update - The Loop
Do you like this video?
Play Sound 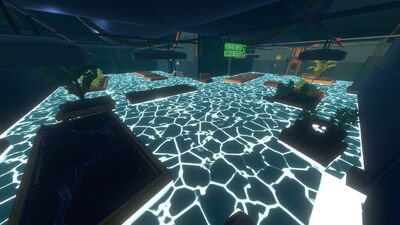 The Plantation Area is an Environment location in Raft and an area of Tangaroa.

The Plantation Area is where the Tangaroans attempted to grow their food, but were thwarted by a beetle infestation. It consists of a series of connected rooms, which have numerous crop plots sticking out of a flooded floor, and the occasional stack of boxes, bags, or other debris. The water in the floor becomes electrified every couple of seconds, zapping the player if touched. To avoid being electrocuted, the player must traverse the rooms by jumping from platform to platform, or running between them within the timing of the water being unaffected by electric current. In terms of items, the player can find two consumables unique to Tangaroa, namely Strawberries and Bananas - as well as their seeds.

The area is electrified due to four faulty electric panels located on the walls, that have to be fixed with three Tape each. These panels will also open certain doors when fixed. The player will find enough tape to fix the first panel in the plantation itself, but will need more tape which can only be found on the upper levels within the Skyscrapers. Since the last location of the city can only be accessed through the plantation, the Tape is effectively a gate forcing the player to explore the whole city. Once the player has fixed all four panels, the water will become permanently safe to walk on and the door to the elevator will open. In the room connecting to the elevator, the Blueprint: Electric Purifier can be found.

The Plantation area also connects to the Surface Access tunnel, providing the player a way to get to the above ground area of the city.