From Raft Wiki
Jump to: navigation, search
This page in other languages: Deutsch

Loot Box is an Environmental object in Raft.

Loot Boxes are containers found throughout the world of Raft that yield a range of items when picked up. They come in different shapes and sizes with a variety of loot, depending on the type of Loot Box. They can be found on Vacated Rafts, in Abandoned Huts, on Story islands, and other hidden locations under and above water. There are ten different types of Loot Boxes with different loot. Do note that treasure found while Treasure Hunting is not considered Loot Boxes. In order to read more about Treasure Hunting, check out its own page and the Metal Detector page.

When picking up a Loot Box, the player will receive a specified amount of loot rolled on a loot table, and some Loot Boxes may even contain a single Recipe. If the player does not have enough Inventory space, the items will be dropped on the ground, allowing the player to prioritize which loot to bring home to the raft. All Loot Boxes on Story islands respawn once the location has unloaded from the game, and loaded back in. Practically, this means sailing roughly 2000 units away from the Island and then sailing back.

Loot in Raft is rolled using a simple percentage based system. When a Loot Box is first picked up, the game determines how many pieces of loot the box holds, and thereafter rolls on the relevant loot table that amount of times. This means that the player can receive duplicate items from a single container. Following is an example using the Food Loot Box found further down on this page. The container drops three to five items, and only rolls between Cooked Potato, Cooked Beet, Cooked Mackerel and Fish Stew. The drop chance for Cooked Potatoes and Beets are the highest, so a likely example could be the player receiving two Cooked Potatoes, a Cooked Beet and a Cooked Mackerel. However, it is also technically possible, although extremely rare, for the player to receive five items with all of them being Fish Stew. Lastly, some loot tables do not sum to 100%. This is mainly caused by the loot table having an empty slot. In other words, one of the items rolled on the loot table can be 'nothing', resulting in one fewer items looted.

There are different types of Loot Boxes to be found, and their availability depends on location. The first type of Loot Box the player encounters is the one resembling a Small Storage, and is referred to as the Raft Loot Box. It's found mainly on Vacated Rafts and Small Islands, and contain an assortment of basic Materials, as well as a chance of dropping a First Tier Recipe. The second and third most common Loot Box are acquired once finding the Radio Tower and thereafter Large Islands. They are referred to the Radio Tower Loot Box and Mountain Loot Box, respectively. The Radio Tower Loot Box is a sealed wooden box with typing on it, whereas the Mountain Loot Box looks like an old-school, large cooler box. 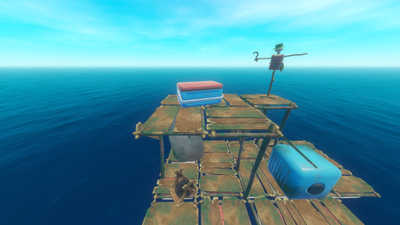 A Raft Loot Box on a Vacated Raft. Identical to the Mountain Loot Box.

The Raft Loot Box is found on Vacated Rafts floating the ocean of Raft, although there's also a single Raft Loot Box hidden in a cave, accessed by swimming, on one of the Large Islands. The Raft Loot Box always contains a First Tier Recipe (see further below). Its contents consists primarily of early-game Materials, although there's also a slim chance of getting some mid-game items, which are hard to come by early. Spotting Vacated Rafts and looting them is a possibly strategy for gaining enough Materials to build advanced equipment early on in the game. 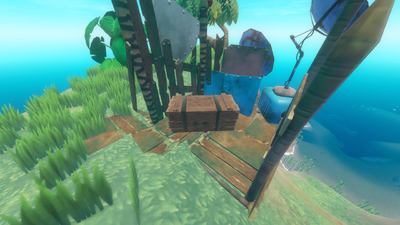 A Radio Tower Loot Box on a Large Island. 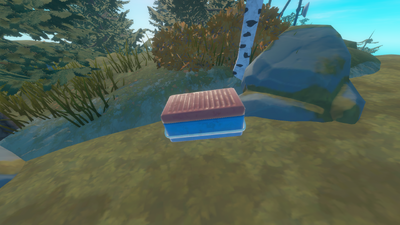 A Mountain Loot Box on an Evergreen Island.

The Mountain Loot Box is a Loot Box of slightly lower quality than the Radio Tower Loot Box. It is more commonly found on Small Islands, although it is also found on Large Islands, as well as Evergreen Islands and Caravan-type Islands. 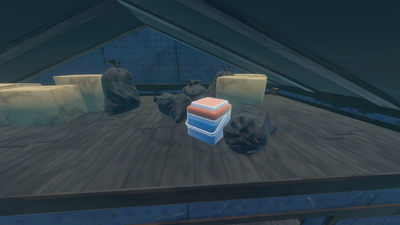 A Food Loot Box inside the Ranger Station on Balboa Island.

A cooler box with few select food items. Mostly found on Story islands, often strategically placed so the player can keep exploring for longer in case they didn't bring their own Sustenance. This container never holds any cooking Recipes. 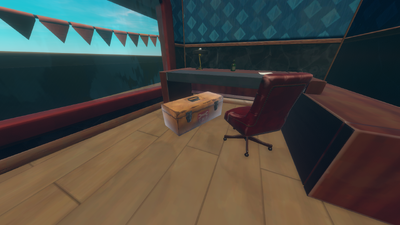 A Metal Loot Box found on the Vasagatan ship.

The Metal Loot Box holds an assortment of mid-to-high quality items, mostly themed around metal. It is found mostly on Vasagatan and Caravan Island, although a few can be found on Tangaroa and a single crate on Balboa Island. The container is a red toolbox. It does not contain any Recipes. 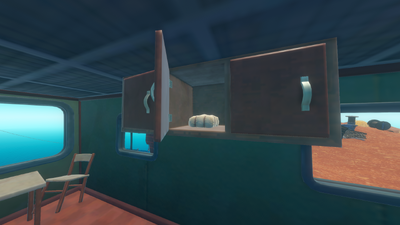 A package with randomized food on Caravan Island.

The Randomized Food Loot Box is found only on Caravan Island and Tangaroa, but in large numbers. The container is a cloth-wrapped package tied with string. It is mostly found in cupboards inside the RVs of Caravan Town, and the kitchen cupboards of the Tangaroa apartments. Does not contain any Recipes. 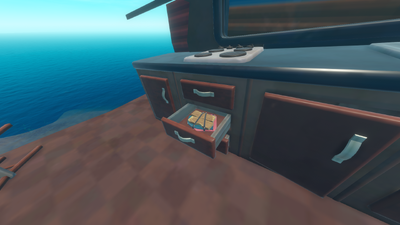 A package with randomized Materials on Caravan Island.

Looks like a few tied pieces of Planks, Plastic, and Scrap. Just shy of a hundred Randomized Materials Loot Boxes can be found in drawers within the RVs of Caravan Island, with a few also available on Tangaroa. Does not contain Recipes. 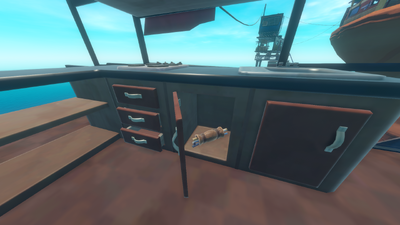 A package with randomized Tools on Caravan Island. 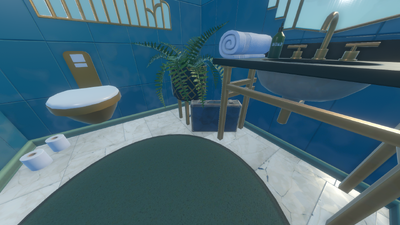 A Tangaroa Suitcase in a Tangaroa bathroom.

The Tangaroa Suitcase can be found in the apartments of Tangaroa. It contains the same loot as the Treasure Hunting suitcase with the exception of having no potential of dropping Developer Paintings. It's often found behind a door taped shut, requiring a Machete to enter. After having cut the tape once, the player may revisit the rooms with Tangaroa Suitcases without the need to cut the blocking tape. 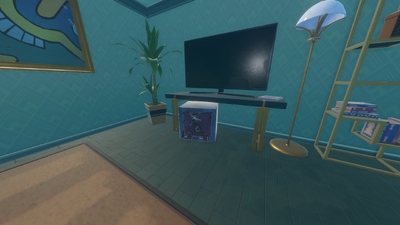 The Tangaroa Safe, found in an apartment.

The Tangaroa Safe can be found in the apartments of Tangaroa. It contains the same loot as the Treasure Hunting safe with the exception of having no potential of dropping Developer Paintings, Toy Robots, or Cassette Tapes. It's often found behind a door taped shut, requiring a Machete to enter. After having cut the tape once, the player may revisit the rooms with Tangaroa Safes without the need to cut the blocking tape.

Many of the Loot Boxes in Raft have a chance of dropping a Recipe. There are two tiers of Recipes, the first containing the easy Recipes and the second containing the medium and hard Recipes. Defining which Loot Boxes drop which tier of Recipe is not feasible, but the player may instead use the following rule of thumb: the easier the Loot Box is to get, the higher the probability it rolls on the first tier of Recipes, while Loot Boxes that are harder to find are more likely to be from the second tier.

Found mainly in Loot Boxes on Vacated Rafts. The First Recipe Tier has a chance of dropping the following Recipes:

Found mainly on Large Islands and Story Islands. The Second Recipe Tier has a chance of dropping the following Recipes: