Draw Bridge is an Environment location in Raft. 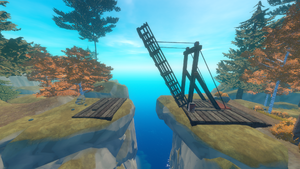 Being hit by the falling bridge deals no damage to the player.

Interestingly, the lever cannot be activated by pulling even if multiple players manage to jump off of each other over the cliff. However, jumping on top of the lever has the same effect as throwing a stone on it.