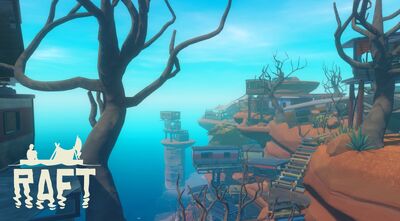 Caravan Island is an Environmental Element in Raft.

Caravan Island is the first location of the Second Chapter released in Update 12. The island consists of a town, also referred to as Caravan Town, which spreads out over three pinnacles with a tower built of containers in the middle. Ziplines and suspension bridges connect the pinnacles, allowing the previous tenants quick access to the different parts of the island. 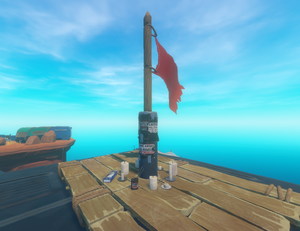 A commemoration seen atop the Container Tower.

On top of the stacked container tower in the middle of Caravan Island is a small commemoration with candles, sparklers and positive news articles posted on a flag pole. All the articles hold some sort of positive news despite the ongoing apocalypse. Among the news is plans to revitalize the Amazon, an Asian reforestation plan, the ReFormation project intended to save Africa, plans for buildings that will reach over expected sea-level, and lastly the possibility of surviving on raft homes. This commemoration gives the player insight into some of the Caravan Island occupants' pastimes, and reassuringly one that suggests that the villagers were of some hope of a future.

The Container Tower in the center of Caravan Island seems to serve a few important purposes. The first is the above mentioned commemoration. The second is the hallway leading into the main Container Tower room. The walls are decorated with hooks in memorial of people who have passed away during the struggles of the apocalypse. Small messages are written by the people who have hung up the hooks. Some carry regrets of not being able to save the person, but most are appreciation of the people being remembered. Inside the tower is a room with a table in the center. On the table is a terrain model of Tangaroa as well as small figures of rafts and a stick to move the pieces around. It is evident that the villagers of Caravan Island were strategizing their approach to Tangaroa, which they must have seen before, either themselves or in a newspaper, given the accuracy of the model.

The infirmary holds a number of Healing Salves as well as the Mayor's Chest Key. To access the infirmary, the player has to get the key from the bottom of the ocean inside a container. It's easy to find, as the bicycle pump's pipe found beneath the Container Tower leads directly to the container in question.

The Mayor's Office is the last location accessed on Caravan Island after acquiring the Zipline Tool. The office holds the four digits that lead to Tangaroa, as well as the workbench for making the Battery Charger, the Mayor Hat and a few resources. Outside the office, on the next-door pinnacle, are two Dirt patches behind the RV. Lastly, leaving the Mayor's Office towards the area with Jenny's Smithy and Carl's Carpentry will lead to the roof of an RV with a Radio Tower Loot Box.

The unique items consist of blueprints and quest items, that will help the player progress with the story.